This day, six years ago, in conjunction with New York City Sculpture (formerly Canal Street Studios), we moved the Blessed Virgin into her niche at Our Lady of Mercy in Potomac Maryland. This is how it went: 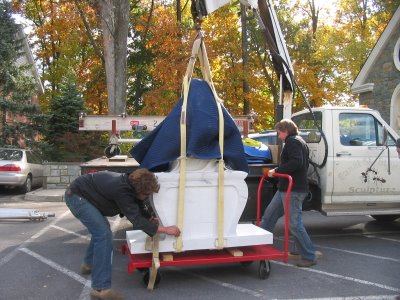 How many people does it take to move a two-ton sculpture of the Blessed Virgin out of the studio, into a truck, sixty-five miles down the road and into a niche in a church?

October 25, 2006. “How many people does it take to move a two-ton sculpture of the Blessed Virgin out of the studio, into a truck, sixty-five miles down the road and into a niche in a church? We had quite a crew out there! I arrived at the studio of Malcolm Harlow in the Shenandoah Valley at ten in the morning. Malcolm was there with the Cambodian sculptor who had helped carve the piece, Chantou Oeur. The two of them were building a ramp to move the sculpture laterally out of the studio. They “got all Egyptian on us,” as the Australian sculpture mover mentioned, and put wooden rollers beneath the base of the sculpture. They rigged a chain and cable to a giant old tree with a wrenching system. JC, the woodworker who did the doorhandles in the Harlow’s home, was there operating the winch. He’d adjust the chain and the sculpture would move forward a few inches along the wooden rollers. Then Chantou and Malcolm had to attach straps to the sculpture to lift it ever so slightly in order to move the rollers to the front as they rolled out the back.

Somehow I got in charge of operating the pulley system to lift the sculpture. “Pull up, Sarah!” It is amazing that a woman of my stature was able to lift such a heavy object using physics. (To all you kids out there- pay attention in science class, you’ll need it!) Then the folks from Canal Street Studios, Andrew and his brother Chris visiting from Australia, arrived with the crane and a truck. So how many people does it take?

One stonecarver, a Cambodian artist, a woodworker, a sculptor (that’s me!), another artist, two Australian sculpture movers, a photographer and a small audience.

Once we got the sculpture on the truck, the movers wrapped her in a blanket and strapped down the marble. We were on our way! We had a caravan of trucks and I was in the lead. When we approached the toll booth for the Dulles Toll Road, the two Australians with the Virgin Mary got in the wrong lane and were sent to the airport. We were able to tell them where to get back on. We were so nervous, would they find the church? The Dulles Toll Road is so confusing. So, we pulled off to the side of the road to call them. “Where are you?” I asked. All the sudden, the Virgin Mary went whizzing by! We were able to get back on the highway and pass them, leading them all the way to the church.

When we got the church, there was no problem using the crane to lower the Virgin onto a dolly designed especially for extra heavy objects. (Again with the physics!) They got the Virgin into the church with no problem, but we had to erect a pulley system able to lift the object and place her in to the niche. The sun set as fatigue overwhelmed our crew. So, we decided to get some rest and resume work in the morning. I am headed back down there in the next hour or so…”

A figurative sculptor for over 20 years, Sarah tells monumental stories in clay, bronze, and stone.