The Story of Hempel Studios, Part I

The following is a reprint of an article that I wrote for Lutheran Forum Magazine, Winter 2007. It will appear here in several parts.

The image came to me rather unexpectedly.  I was on an airplane midway between Oslo and Reykjavik, on my way home after spending two glorious weeks visiting a friend in Norway.  Waiting for me at home were the usual what-am-I-going-to-do-with-my-life decisions that come with being a senior in college. I sobbed for nearly an hour during my flight. I called out to God silently, crying out for comfort, but what I really needed was some direction.  God gave me a vision of a sculpture that I had to make. I pulled out a pen and sketched out the image on an overturned piece of stationary. I drew an image of a woman, shown from the waist up. Her head and eyes turned dramatically to one side as her body twisted in the opposite direction. The visual effect was that of a spiral. This was an image of a woman heading the call of God, even as her body turns from Him.

My sculpture professor and mentor at Hillsdale College, Anthony Frudakis, advised me not to talk too much about a work of art until it is finished. He told me that talking about it steals energy that needs to be devoted to creating the work itself. So, I sealed my lips and went to work. I built an armature out of steel pipe from the hardware store, aluminum wire, gutter guard, and some duct tape. When the “skeleton” was complete, I added the clay. The sort of clay I use is an oil-based plastiline that never hardens and never dries out. It needs to be warmed and worked with the hands in order to be pliable. I found other students to model for me and the sculpture became a composite of several different women. I came to the studio joyfully, in three-hour increments several days a week. In just a few months I was finished.

Another art professor pointed out that the sculpture looked like an Annunciation. I was not exactly sure what an Annunciation was, so I flipped through my copy of Janson’s History of Art.   Sure enough, in the medieval and Renaissance pages there appeared painting after painting, sculpture after sculpture of the Virgin Mary receiving word from the Angel Gabriel. She was usually shown with her body turning away from the angel, but her eyes gazing directly at him. The gesture communicates the spirit’s willingness to say “Yes” to God, but the fleshly resistance of the body.

This was a deep moment of revelation for me. The sculpture was already called “The King’s Handmaiden,” named when I received the vision, before I even started applying the clay. Finally, I understood my own sculpture!

And Mary said, “My soul doth magnify the Lord, and my spirit hath rejoiced in God my Savior. For He hath regarded the low estate of His handmaiden: for, behold, from henceforth all generations shall call me blessed. For He that is mighty hath done to me great things; and holy is His name. And His mercy is on them that fear Him from generation to generation (Luke 1:46).”

At this moment, I felt as if I had had my own annunciation of sorts; the Lord was calling me to be a sculptor. This was also the moment that I began to identify with Mary. God was asking her to do something very, very difficult and painful, much more so than anything I can imagine. But the Lord calls different people to different tasks.  What I saw in her response — “Be it unto me as you have said”– was the very response that I wanted to have when God called me to do His will. 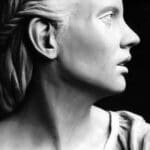 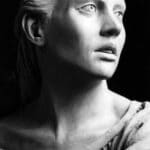 Now that I knew my vocation, I jumped in with two feet. I moved to Maryland after graduation to take a job as a studio assistant for Jay Hall Carpenter, former artist-in-residence at the Washington National Cathedral. I worked in his studio enlarging and roughing in sculptures, pouring plaster casts, cleaning tools, recycling clay, and delivering pieces to galleries and sites. For about a year I soaked up every drip of sculptor’s wisdom I could before I headed off on my own.

As Providence would have it, a fellow in my Irish set dancing troupe was an arts consultant who had volunteered to pull together a talented crew of artists and designers to fill his parish’s new building with sculpture, stained glass, banners, and vestments. I teamed up with another young sculptor and presented a proposal to create the fourteen Stations of the Cross. The arts committee at Our Lady of Mercy Catholic Parish miraculously took a chance on a couple of young artists. Somehow they could see our vision.